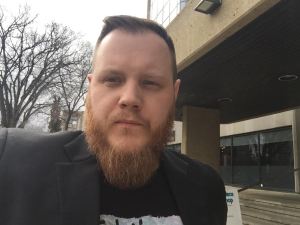 Meet Nathan Terlesky, one half of the soccer-loving duo that chats about FC Edmonton and other football-related matters on the Loyal Company of the River Valley podcast.

In this hockey-mad city, other sports tend to get short shrift in the media, even for Alberta’s only professional soccer team. But that creates an opportunity for the hardcore fans to fill the gap with their own commentary and reporting. While Nathan has noticed more mainstream attention lately , those stories are still aimed at a general audience. The podcasters and bloggers can go deeper, and offer the fan’s-eye view of the game. Nathan and his co-host Adam clearly relish providing that service.

We had a great conversation about the origins of the podcast’s name and its Fear No Foe motto; the challenges of keeping a podcast going when your co-host moves away; and juggling a day job and family responsibilities with a regular podcast that involves a lot of sports-watching.

I should note that FC Edmonton’s record has improved since we recorded the podcast; the team is at two wins, two draws and two losses as I write this.

You can also get it in iTunes, on SoundCloud or on Stitcher.

Nathan also recommended a couple of other Canadian podcasts: From the Black Hole and The Canadian Soccer Experiment. If you’re interested in any podcasts for specific NASL teams, hit him up on Twitter. He is @jediknightnate and Adam is @_adamdh.

The Loyal Company of the River Valley is among the podcasts signalling an interest in the Seen and Heard in Edmonton podcast network. If you’d like to join, apply here.

This week’s Seen and Heard in Edmonton is brought to you by The Underdogs of Comedy, a new web series from the edmontonian media co.

The show offers a look at indie comics taking to stages at bars, venues and pop-up shows across Edmonton. Watch six of your new favourite comedians at theunderdogsofcomedy.com.