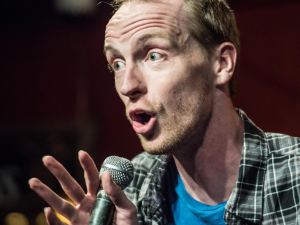 Meet Dave Rae, the comic, sketch comedian and improviser who takes any side of any debate and always wins on The Devil’s Advocate.

I first learned of Dave and his podcast through the Northern Content Network, a collection of primarily (but not exclusively) comedian-produced podcasts gathered by Dan Clarke and Dan Taylor. The Devil’s Advocate quickly caught my attention as a smart, funny exercise that was unlike anything else I had heard. Dave has made me laugh out loud so many times. He did it a lot during this episode, too.

He started in standup when he moved to Edmonton because that was easiest as a guy who didn’t know anybody yet and wanted to get into comedy. But he has since found a way to do sketch comedy, too, through The Debutantes, which puts on a sketch show called Odd Wednesday every other week at the Sewing Machine Factory.

In this episode, you’ll hear about Edmonton’s comedy scene, how it interacts with podcasting, the parallels between Dave’s approach and pro wrestling, the formidable Stan Ostrowski, sketch vs standup, and much more. We also talk about one of his favourite episodes and mine, a debate with Dan Taylor about the merits of having living relatives.

This episode is also available in iTunes, on Google Play, on SoundCloud or on Stitcher.

Dave made these recommendations:

This episode of Seen and Heard in Edmonton is brought to you by Taproot Edmonton, which commissions curiosity-driven stories about the city, cultivated by the community.

The British website journalism.co.uk recently interviewed Taproot co-founder Mack Male. Read the story and listen to the podcast, which is excerpted in this episode.

Check out Taproot’s latest story, How to stop discounting pedestrian deaths. And if you’d like to see more stories like that, buy a membership at taprootedmonton.ca.

One thought on “Episode 55: Dave Rae”