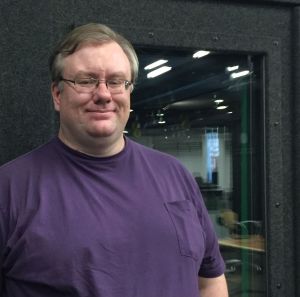 Meet Ben Yendall, the storytelling, community-building co-host of Tales from the Hydian Way, a podcast about a role-playing game set in the Star Wars universe.

As Ben says, Tales from the Hydian Way is about as niche as you can get, but podcasting is a great medium for serving your particular pack of people. He followed the advice we’ve often heard here and elsewhere: Make the podcast you want to listen to.

I don’t play the game and I stopped watching Star Wars at Return of the Jedi, and yet I tune into Tales from the Hydian Way from time to time just to hear them talk. Ben and his co-hosts David and Joshua improvise fan fiction online with people all over the world in the game, and then analyze how to do it better on the podcast. Isn’t that amazing?

It might be tempting with that level of expertise to exclude newcomers, but Ben has no time for gatekeeping or noob-shaming. “It doesn’t do us any good to make the community smaller,” he says. That’s pretty great, too.

This episode is also available in iTunes, on Google Play, on SoundCloud or on Stitcher.

Ben made these great local recommendations:

Ben himself is @deuteriumice on Twitter. And you can often find him in real life at our Edmonton Podcasting Meetup. The next one is on Sept. 18 at Cafe Rista, on the subject of how to start a podcast, and we’ll be mining the expertise of our veteran podcasters to help people start their own. Sign up here.

This episode was one of several recorded at the Makerspace at the downtown Edmonton Public Library on 100 in 1 Day. Watch for more episodes recorded that day in coming weeks.

This week’s Seen and Heard in Edmonton is brought to you by Taproot Edmonton, a new member-supported home for local stories created with the community and not just for it. We just launched the Story Garden, which you’ll hear Mack Male talk about in this episode.

If you’d like to help create a new way to sustain how-and-why journalism in our city, join Taproot today.