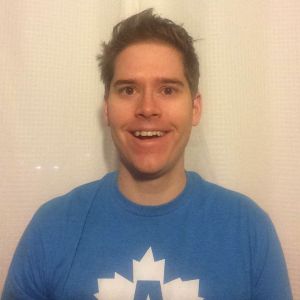 Meet Colin MacIntyre,  creator of the vital and hilarious Long John Index, a service he runs during Canada’s colder months to suggest how we should dress for the weather.

The index began with “blurting” on Twitter, Colin says. He soon found encouragement and a place to get started at The Edmontonian, that incubator of ideas that Jeff Samsonow and Sally Poulsen ran, changing the face of online Edmonton along the way. You’ll hear Colin and me pay tribute to them before we get into the present and future of the Long John Index.

The Long John Index is a lot of fun to read, and I think you’ll hear in Colin’s voice that it’s a lot of fun to create, too. But it’s also work. Colin gets up at 6 a.m. to survey the weather and start thinking up jokes to go on the map. It’s no wonder he’s so happy when the spring thaw finally comes.

You can also get it on SoundCloud, in iTunes, or on Stitcher.

Here are Colin’s recommendations (most mentioned on the show, with a few more he threw in for good measure):

This will be the last podcast from Seen and Heard in Edmonton for 2015, but don’t worry, it’ll be back in January.

This episode is brought to you by Songs for Terrible Children, the new album by songwriter and performer Ben Spencer. It’s satire for kids, a smart, funny take on social issues that really works.

You’ll get a taste of it in this episode with an excerpt from You and I are Different (And It Terrifies Me). Get more on iTunes.